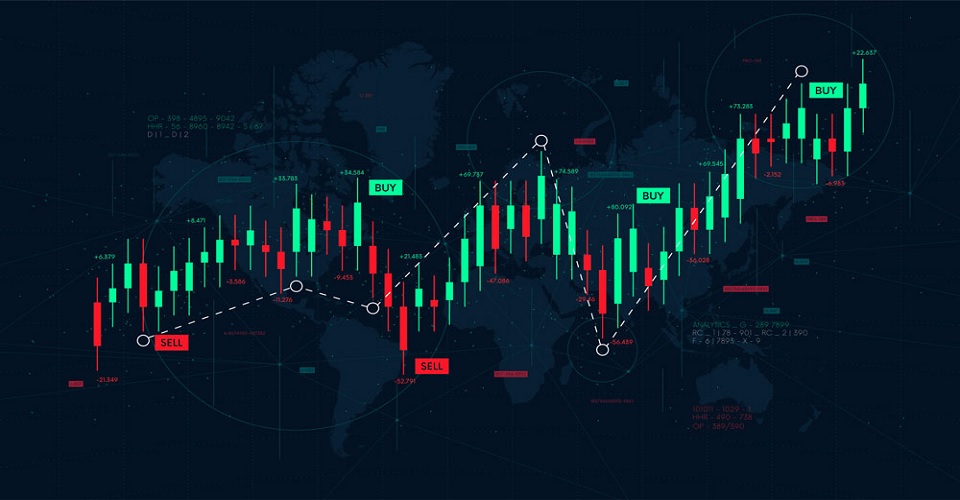 2. Relative Strength Index (RSI)
The RSI is a measurement index that is commonly used by traders to evaluate the price momentum of a security. The RSI shows how quickly traders are bidding the price of the particular security, and they could be gaining momentum on the long or on the short side. The result is then shown on a scale from 0 to 100. The Relative Strength Index shows the point at which the price will most probably reverse. This occurs when the values of 80 to the upside or 20 to the downside are obtained.
In a downtrend, the price will move below 20. This suggests that there will be a bullish market reversal very soon. However, upward price trends will be marked by values above 80. In such cases, a potential bearish market reversal will be predicted. It is also worth mentioning that the RSI will not indicate how far a correction is expected to go.

3. MACD
The moving average convergence divergence (MACD) trading indicator is a tool that is used to evaluate price deflections. This forex indicator features an exponential moving average along with a histogram. The hidden divergence between the price and the MACD indicates market continuation. In the case of regular divergence, a market reversal is expected. MACD is mainly used to formulate trading strategies. It has often been used to identify a continuation point or else, a possible point where market reversal is bound to occur. The standard settings of the MACD are 12-26-9 based on the closing price.

4. Bollinger Bands
The Bollinger Bands are also used as a forex indicator. They were developed by an American technical analyst, John A. Bollinger, thus their name. Compared to other technical indicators, many novice traders tend to find Bollinger Bands relatively easier to use.
Bollinger Bands features classical moving average at the center along with two upside and downside standard deviations. This reflects the upper and lower lines for dynamic support and resistance levels.
If the upper band is reached, a potential short trade with the moving average in the center is considered as a target. On the other hand, if the lower band is touched, it indicates a potential long trade with the moving average as the target. Any candle which is either close to the above, or below the centerline at the middle is considered to be an indication for an opportunity to test the higher band, or vice versa for the short side. Bollinger Bands tend to work best in sideways markets but they can be used in other cases as well.

6. Pivot Point
Pivot Point indicators are often used to show a currency pair’s supply and demand equilibrium. When an equilibrium price point is attained, it means that there is an equal demand and supply for that currency pair. However, in the case that the price rises beyond the pivot point, it means that the currency pair’s demand is high. On the other hand, if the price point is below the pivot point, then the supply of that currency pair would be high.
Regardless of the direction currency pairs end up taking, prices have a tendency of moving to the equilibrium level, and this generally occurs before they take either direction in a normal currency trading setup. Hence, this means that the Pivot Point indicator offers a potential entry point to trading based on the pivot point’s rejection. Pivot points are normally calculated on the previous day’s price action. As a result, it can only be applied to intraday charts.

8. Fibonacci
Fibonacci is another very popular forex indicator. It indicates the exact direction of the market and as a result many traders like to make use of it since it helps them to identify areas and reversals where profit can be taken. The Fibonacci levels are calculated once the market makes a big move, be it up or down and then it seems to have flattened out at a specific price level. The retracement levels of Fibonacci are then plotted so as to find areas to which markets may go back over before moving back to the trend during which the movement was originally created.

9. Stochastic
Stochastic is considered to be one of the best forex indicators. It helps traders to manage to identify momentum as well as the overbought or oversold zones. The stochastic oscillator allows traders to better recognize any trends that are expected to be a reversal. A stochastic indicator can determine the momentum by assessing the closing price and the trading range over a specific period of time.

10. Ichimoku Kinko Hyo
Ichimoku Kinko Hyo or the Ichimoku Cloud is yet another forex indicator that is gaining popularity. It comprises elements to help a trader create a complete trading strategy. Various elements in this indicator help traders to recognize important aspects of the market. The Kumo Cloud, for instance, is the first element of this indicator. This offers the trader the opportunity to understand the market context. If the price is trading below the Kumo Cloud, then the overall trend is bound to be bearish, whereas if it is above the Kumo Cloud it will be bullish.